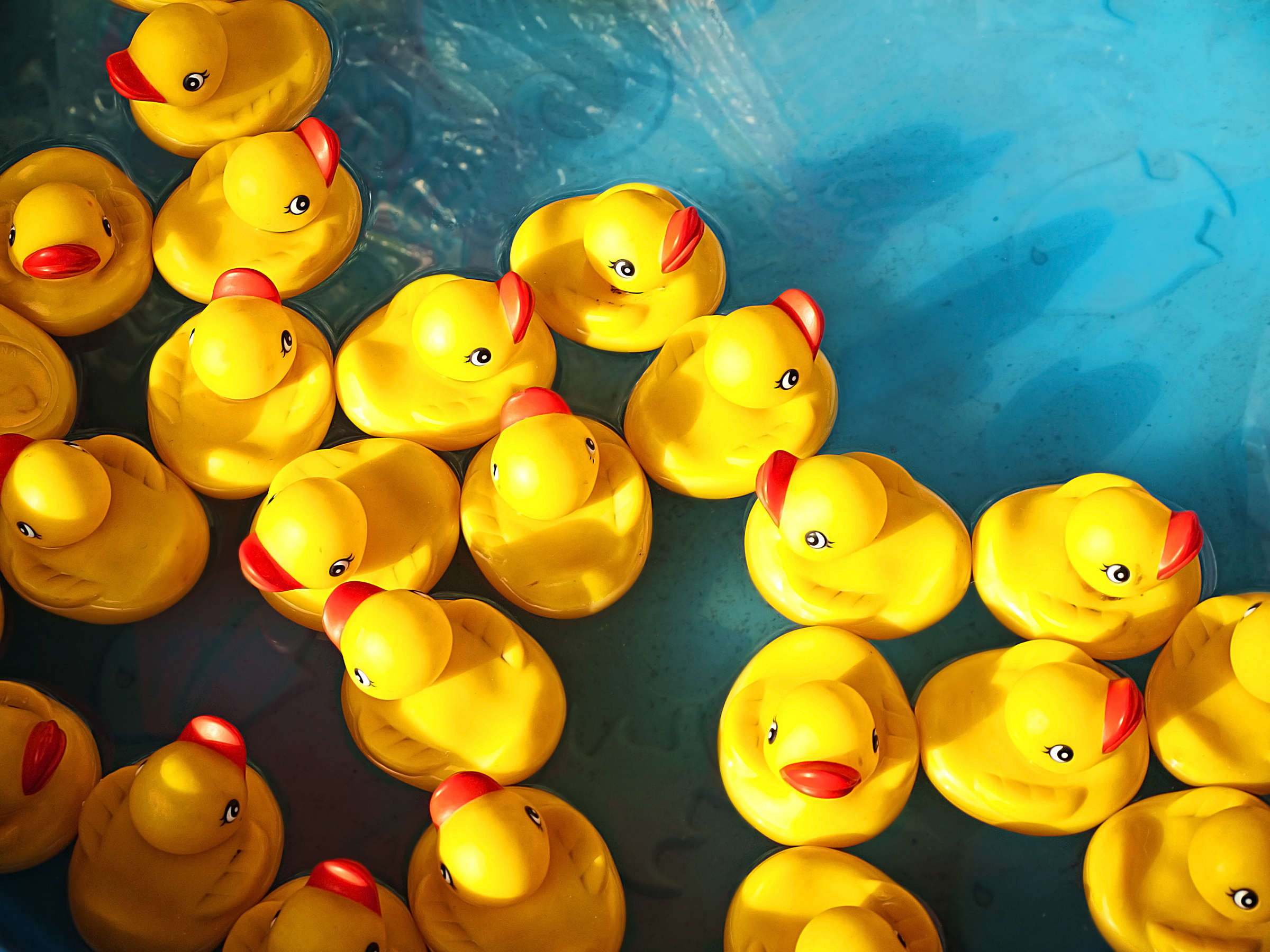 I just bought this tiny USB microcontroller called the USB Rubber Ducky from Hak5. It’s a really nifty piece of hardware that acts like a USB keyboard when plugged into a computer. Since it’s totally programmable, you can use the Rubber Ducky to type in whatever you want into the host machine as soon as it is plugged in. 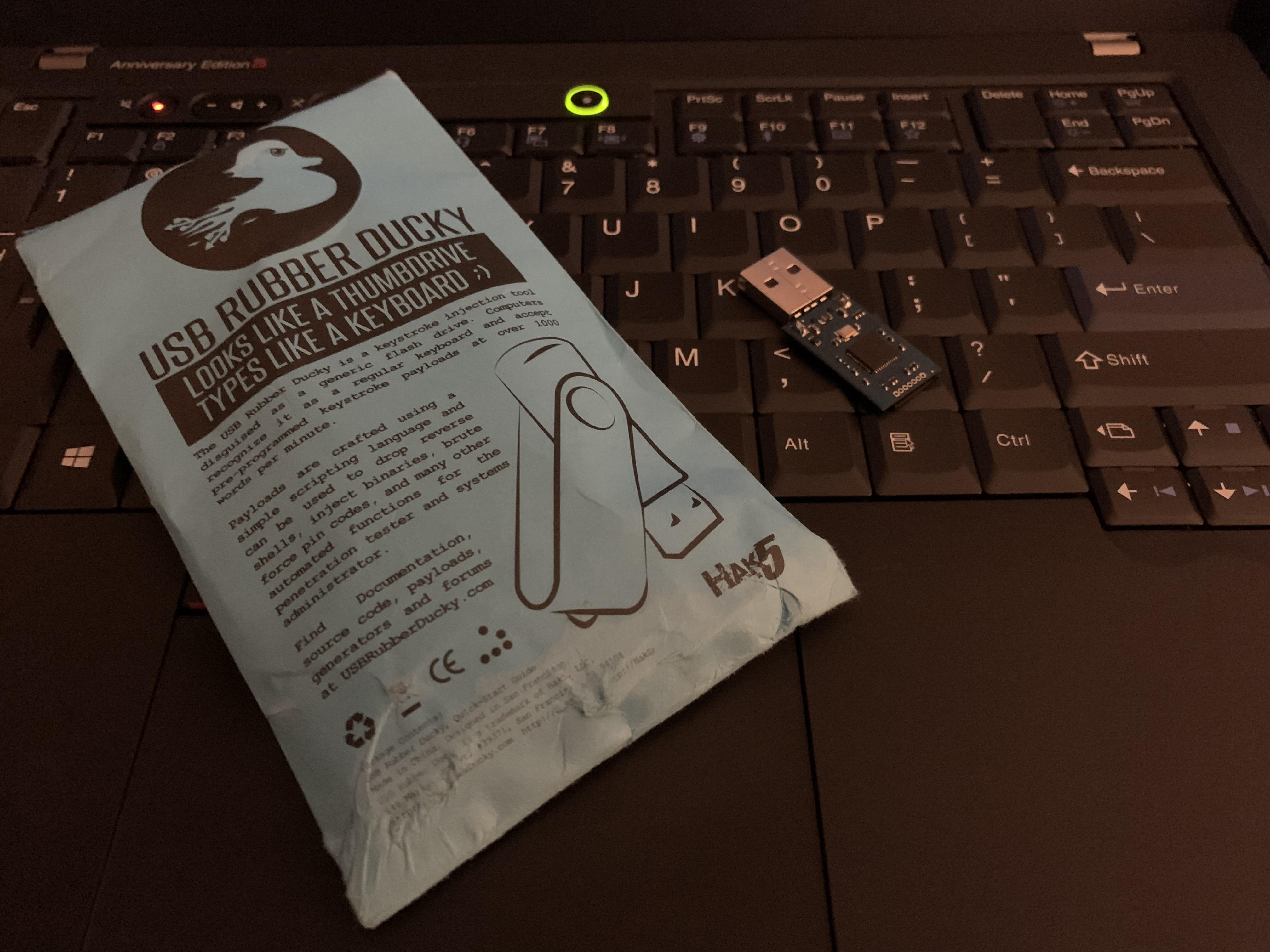 The Rubber Ducky is really useful for penetration testing, and in fact pen-testers have been using a similar technique with devices such as the Teensy or Arduino for a while now. The neat thing about the Rubber Ducky is that it uses a DSL called Ducky Script to make the process of automating keyboard input extremely easy.

For example, let’s say that I have a macOS desktop and I want the Rubber Ducky to automatically launch the TextEdit app and type “Cyber World” into a document. Here is what the Ducky Script would look like to accomplish this task.

Ducky Script divides each line into two parts: a command, and all of its arguments. Commands can also be modifier keys, which are useful for executing keyboard shortcuts on the host machine.

The first line is simply a comment. Any line starting with REM is treated as a comment and ignored by the interpreter.

The second line asks the device to hold down the Command key and press the space bar. On macOS desktops, this is invokes the Spotlight modal interface, which offers a quick and easy way to launch applications.

The third line uses the most important command in Ducky Script, the STRING command, which causes the device to type whatever you write on the right-hand side. The only thing this third line does is type “textedit” into the Spotlight UI.

The ENTER command is pretty self-explanatory. This presses the enter key on the host system.

The fifth line is important, and shows an unfortunate drawback to using this kind of device as a automated control mechanism. Since TextEdit takes a little while to actually launch and become foregrounded, we have to pause execution on the Rubber Ducky so that it doesn’t move onto the next command before the host machine is ready. This line waits 500 milliseconds before continuing.

Finally the last line uses the same STRING command we used earlier to type the text “Cyber World” into the TextEdit window.

Though this example essentially does something completely useless, it’s easy to see what kind of neat applications can be created using the Rubber Ducky. There are some fun pranks that can be developed using this, such as using the keyboard to invert the colors on someone’s screen, or magnifying all of the text multiple times.

I had a slightly more sinister use case in mind for this however.

Office workers notoriously have pretty bad operational security while using their computers in an open office setting. This is not mostly due to stupidity, but rather they assume that because their machines are behind locked doors or in a building with a lot of surveillance that nobody will walk up and do anything malicious.

What if there was a magical USB device that would automatically let me open a remote shell from my server?

We have to be a little creative here because we can’t make very many assumptions about what kind of programs are installed on the victim’s machine. For this exercise, let’s assume that the machine is running macOS, which means it has basic BSD and UNIX utilities like netcat and sh.

Reading the manpages for netcat turn up two pretty interesting options: -e and -c, both of which allow us to execute a shell command immediately after connecting. This sounds like exactly what we want. We can just connect to a remote server that is listening on some port and use the -c option to start a remote shell on the victim machine.

Unfortunately (fortunately?) we weren’t the only ones to think of using this option as an attack vector. Most UNIX distributions (macOS included) disable both of these options because they open the machine to gaping security holes. OS engineers always have to ruin the fun…

Turns out this isn’t too big of a deal, because we can use other ways to redirect input and output from our remote shell.

Another way to do this is to use one of my favorite UNIX features called named pipes. Named pipes are not any different from regular pipes, except the only difference is that they are files that are accessible via the file system.

Making a named pipe on any UNIX system is as simple as running the mkfifo command and specifying where we want the named pipe to be stored on the filesystem.

This command creates a named pipe and stores it at the path /tmp/mypipe. To read data from this pipe, we can use any program we like for reading a file’s contents (e.g. cat). Writing to it is just as simple as using any program that can write output to a file. All reading and writing is done in a blocking and synchronous manner just like other kinds of pipes.

Named pipes are a useful way to do inter-process communication. For our purposes, we can use it to start one process that executes commands and another process that reads data over a TCP socket, and use the named pipe to connect these two together.

My first attempt at this was to read data from this named pipe and pipe this into an instance of sh running with the -i option. The -i option specifies that the shell is running in an interactive mode and input/output are attached to a terminal. After this, we use the netcat command to open a TCP socket to our server (again called coolhost) and redirect its output to our named pipe so that it can talk to the shell. This effectively allows us to spawn a shell and redirect all input and output over a TCP socket, using a port number of our choice. (I used port number 5730 for this example.)

On the server, we start a listener by running the following command:

On the victim’s machine (the client), we run this command:

Annoyingly the parent shell doesn’t let this command start without suspending it immediately.

This is because the sh -i command begins reading input from the tty right after starting, and the shell assumes that this will be a deadlock while running in the background, so it suspends the process instead. This is no good because we need the shell to start in the background so that we can close the terminal window without the victim noticing.

On the server where we started the listener, we can now issue shell commands and read the output simply by typing in characters and pressing return.

The slight drawback to not using the -i option is that we don’t get a shell prompt on the remote server. The only way we know it’s working is by typing commands and seeing if we get output back from the victim’s machine.

We’re almost done with our payload. There is one remaining problem which is that the shell process we start will be terminated as soon as we close the terminal window because the shell started as a background job. The easy fix for this is to simply run the disown command at the end, which tells the shell to not send a SIGHUP to job processes when the parent shell receives it.

Our final payload line is the following: 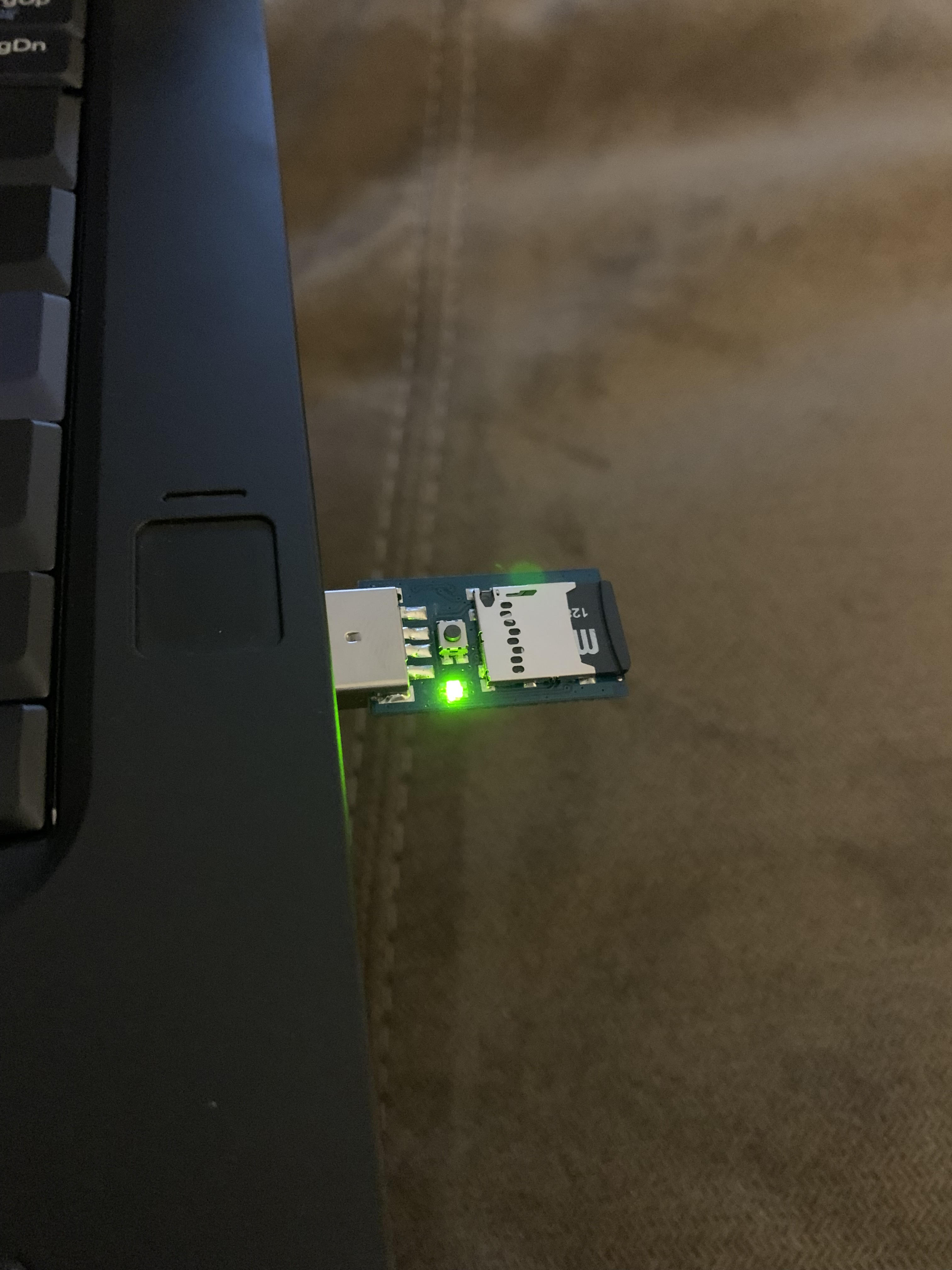 The hardest part of our research is done. Now the only thing we have to do is write the super fun Rubber Ducky script to type this into a terminal as soon as it is plugged into a machine.

Here is the script I wrote with comments (starting with REM) explaining each part.

That’s it for our Rubber Ducky script. Now we just have to encode this and store it on the Rubber Ducky’s flash memory, and it will run as soon as we plug it into a computer.

There is one more refinement I wanted make to this process. I didn’t like that I had to manually start a netcat listener on my server every time before plugging the Rubber Ducky into the victim’s system. I decided to use the screen command on my server to park the listener, using the -DmS option to start it as a daemon without forking.

The hax0r.tty is just a random name that I used to refer to the screen later, when I want to see if I have someone trapped in my remote shell. Running this command will attach me to the screen running the netcat listener, allowing me to access the remote shell (if any).

Finally, here’s a systemd unit that I used to start the screen daemon on bootup.

Because I’m using the Restart=always option, I can terminate any shells that I have trapped on my server, and systemd will automatically restart the screen daemon again, waiting for the next victim.